The ever-present geomagnetic activity, and the geomagnetic storms in particular, are some of the primary causes of ionospheric variability and disturbances. For this reason, we have developed a service for monitoring the local geomagnetic activity and alerting the users when storm conditions are detected. The service utilises both ground- and space- based measurements.

A nowcast system for operational estimation of a proxy K-type geomagnetic index (K-LOGIC) has been developed (Stankov et al., 2011). K-LOGIC is based on a fully automated computer procedure for real-time digital magnetogram data acquisition, data screening and removing the outliers, estimating the solar regular variation of the geomagnetic field, calculating the index, and issuing an alert if storm-level activity is indicated. This is a time-controlled (rather than event-driven) system delivering as regular output: the index value, the estimated quality flag, and eventually, an alert. Novel features are first, the strict control of the data input and processing and second, the increased frequency of producing the index (every one hour). The nowcast system operability, accuracy and precision have been tested with instantaneous measurements from the recent years. A statistical comparison between nowcast and definitive index values proves that the average r.m.s. error is smaller than 1 K unit. Here is a link to the K-LOGIC operational service.

The main difficulty with this system was the data filtering: in order to avoid false storm alerts strict criteria were implemented to remove spikes from the magnetic data. However, this often resulted in correct data points being removed. In order to improve on this, in 2020 a new K-index calculation method was developed in wich data validation is done by comparing the data from the Dourbes observatory with concurent measurements at Manhay (Verhulst et al., 2021). This results in far fewer data points getting removed, and a vastly imrpoved confidence level for the obtained index values.

In addition, indices are still calculated for both the Manhay and Dourbes observatories separately, according to the single station method of Stankov et al. (2011). This provides an additional level of reliability because both observatories operate independently from each other. Whenever data from one observatory is not available, the single-station index obtained from the other can be used as a fallback system. Both the two-station index and the single station indices are shown together for easy comparison. 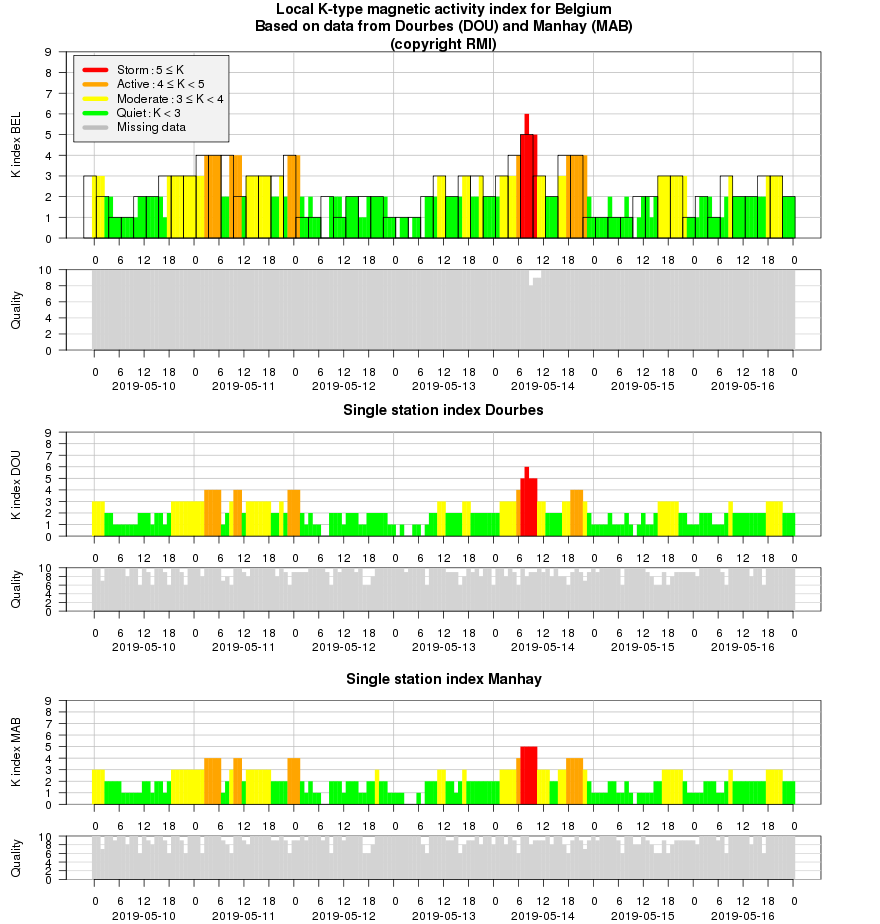 The space-based estimation of the geomagnetic activity (represented by the well-known planetary Kp index) uses solar wind measurements by the Advanced Composition Explorer (ACE) satellite and an analogue model (Andonov et al., 2004) relating the index to measurements of the interplanetary magnetic field (IMF) Bz component, the solar wind velocity and dynamic pressure. Developed originally with the assumption that Kp is a function of the IMF Bz component, the model in fact uses a modified Bz function, describing the observed delayed reaction of Kp to Bz changes. Made in analogy to a time-delayed output voltage in a diode rectifier circuit, the model introduces two time constants to account for this delay. To improve accuracy, it was later upgraded to also account for the solar wind velocity and dynamic pressure variability. In result, the model provides a proxy K index, highly correlated with the Kp index, and with an overall model error estimated at 0.63 Kp units. Here is a link to the Kp-space operational service.