Vertical Incidence Sounding (VIS) remains one of the most accurate and important ionosphere-monitoring techniques (Jodogne and Stankov, 2002; Stankov et al., 2012; Sapundjiev and Stankov, 2016). In this technique, low- and high-frequency radio waves are transmitted upward and reflected in the ionosphere at the height where the refractive index becomes zero for vertical incidence. In the ionosonde, a transmitter and a receiver are swept synchronously in frequency, and the propagation time of the reflected signal is recorded for each of the transmitted frequencies. Thus, the resulting ionogram is an instantaneous record of the ionospheric conditions (above the sounder) indicated by the relationship between the frequency of the radio pulse emitted upwards and the virtual heights of echoes reflected from the ionosphere. In a typical ionogram, the frequency range covers the interval 1–20 MHz and the height range covers 0–1000 km.

Many present-day applications rely on operational automatic scaling by digital ionosondes for regularly obtaining the most important ionospheric characteristics. In April 2011, a new digital ionosonde, Lowell Digisonde-4D (DPS-4D), was installed at the RMI Geophysical Centre in Dourbes (http://digisonde.oma.be/) together with the latest version of the computer software for automatic ionogram interpretation, ARTIST-5. The digisonde was also equipped with new transmit and receive antennas which substantially improved the quality of measurements. The installation and the initial calibration went smoothly and since then the digisonde is being operated in a high time resolution mode, one sounding per 5 minutes. Here is a link to the operational service displaying the most recent and current autoscaled values of key ionospheric characteristics measured by the ionosonde in Dourbes. The most recent MUF for various distances can be found on this page. 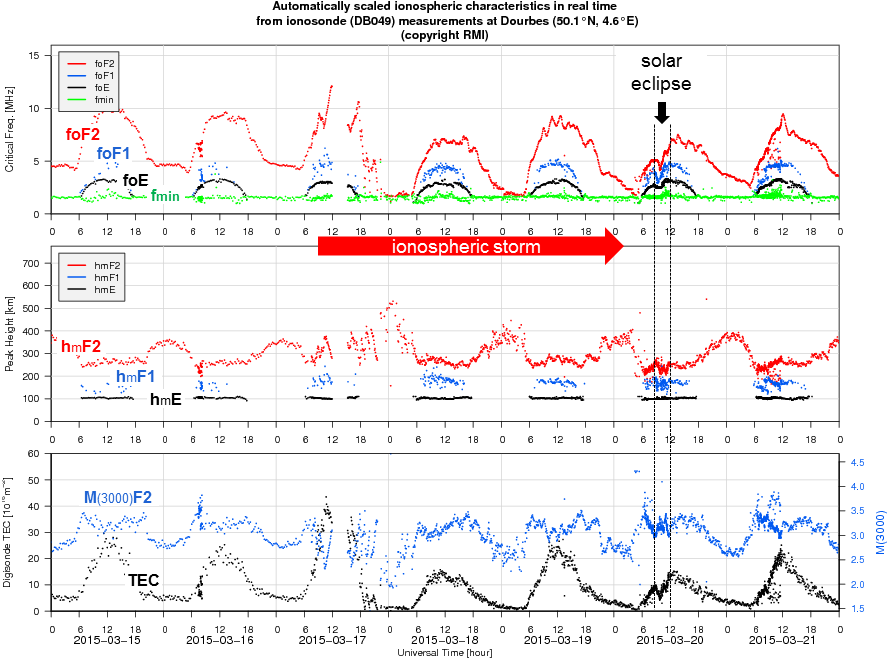 The ionospheric sporadic E-layer (Es) is an irregular layer of ionisation occuring within the ionospheric E-layer and characterised by small thin “clouds” of intense ionisation, an altitude-thin layer at an unpredictable altitude and/or an unexpected intensity. Sporadic-E events may last from just a few minutes up to several hours. The sporadic E layer is an important phenomenon in radio communication due to its ability to reflect higher frequencies than those typical for the ionospheric E layer and even the F layer—it can support reflection of radio waves at frequencies of up to 200 MHz. Es propagation skip distances are generally around 1600 km, distances for one hop propagation can be as close as 900 km and up to 2500 km. Thus, when present, Es can open up radio wave propagation paths that are generally unreachable. The Es layer behaviour is elusive and not yet fully understood, and as a consequence, it is difficult to forecast. Here is a link to the Es-layer monitoring service. 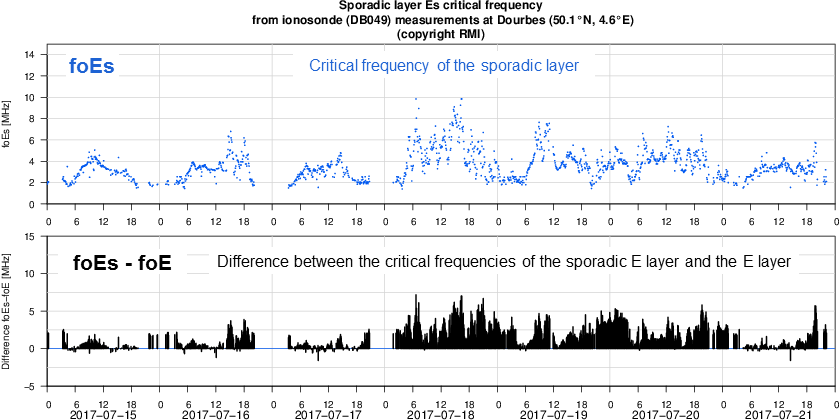 The Total Electron Content (TEC) is the integral of the electron concentration on the GNSS receiver-to-satellite path, results usually presented in TEC Units (TECU): 1 TECU=1016 electrons/m2. The GNSS-derived TEC has proved to be a robust characteristic representing well the state of the Earth’s ionosphere-plasmasphere system during both quiet and disturbed geomagnetic conditions (Jodogne and Stankov, 2002). In fact, the very existence and dynamics of the Earth's thermosphere-ionosphere-plasmasphere system are determined by the solar and geomagnetic processes which are able to inflict strong and multi-faceted response from the system and one of its main characteristic—TEC (Jodogne and Stankov, 2002). While the long-term (average) behaviour at a given location is primarily determined by the level of solar activity, the short-term behaviour is additionally influenced by atmospheric and solar-terrestrial conditions, most important being the geomagnetic activity (Stankov et al., 2010). Thus, monitoring the GNSS TEC is very important; not only in a stand-alone service but also as part of other relevant services, e.g. in the LIEDR system (Stankov et al., 2011). Here is a link to the TEC operational service.